Moving Slowly but in God's Timing

June 10, 2017
I haven’t posted in this blog for awhile because things have been moving slowly in Tom’s treatment.  His recovery from the two surgeries went well.  He developed an infection after the first surgery.  The first antibiotic didn’t work well.  But the infection cleared up quickly with the second antibiotic.
Surgery of Tom’s type requires drain tubes to eliminate a build-up of fluid that comes with such a large removal of tissue.  The drains must stay in his chest until the fluid stops. Tom’s drains have been slow to stop.  But it was going well this week and the fluid was slowing down.  Unfortunately, he developed an infection in the area where the two tubes enter his chest.  So, he’s back on the antibiotic for another round.

The discouraging part of this is that chemo can’t start until he’s done with the antibiotic and the infection is cleared up.  We’re looking  June 20 for the start of chemo at the earliest instead of the June 13 we originally planned.

In preparation for chemo, he had a port inserted in his chest.  This is a small plastic (about 1 ½ inches) entry way for the chemo to go directly into his bloodstream. It rests under his skin.  You cannot see it but you can feel it.  It required a trip to the hospital and he had to be under anesthetic again. Forunately this time it was a lighter anesthetic and he was somewhat awake for the procedure.

We are learning that we aren’t in charge anymore.  When the hospital called and rescheduled it from June 5 to June 6, we agreed.  June 6 is our wedding anniversary but we put our anniversary plans on hold to keep the treatment process rolling.   While waiting for Tom to return from surgery, I mentioned to the nurse that it was our wedding anniversary.  Later when I joined him in the recovery room, the nurses had a cake for us to help us celebrate our big day. 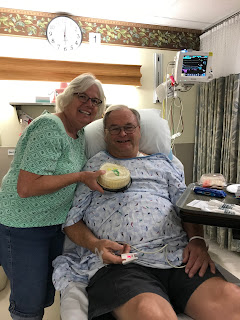 It was 47 years ago that we were married in Calvary Baptist Church in Sault Ste. Marie.  Lots of things of changed since then.  We’ve both lost our grandparents, parents and even Tom’s brother.  But Tom and my love has grown deeper each year.  This latest journey since his diagnosis has brought a new level to our relationship.  We are depending on each other to help through the rough spots, the discouragements and to celebrate the good news together. 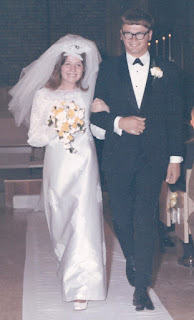 Again, we are so thankful for the support of our children, our extended family and our friends.  Since Tom’s first surgery there has not been one day when he hasn’t received a card in the mail-some kind, some inspirational and some funny.  Thank you all of you.