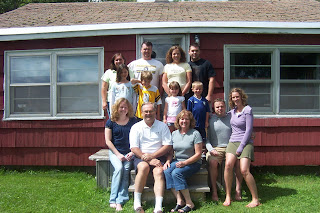 Let me start out by saying that our cabin was built approximately 60 years ago by my grandparents. They had the logs cut from tamarack trees which are known for their hardiness. For many years the cabin was used only in the summer but at some point they decided to winterize it and add running water, electricity etc. We bought the cabin in 1999 after my grandmother passed away. We known all along that it needed major work to survive. It was built as a cabin and as things break, it has become increasingly difficult to fix them.
So here begins the story of the hot water heater. Each year we get the heater going and are thankful that it lasted through another year. But when we returned up here last week, our good luck ran out. The first night Tom put the fuses in to start it and it went well but the next morning, we had boiling hot water. The thermostat was broken and then it let loose and we had water all over the kitchen where the heater is.
This is what it looked like when Tom started taking it apart. Every time we have done a project here, we have had surprises. Tom said before we started to be prepared and we weren't
disappointed. 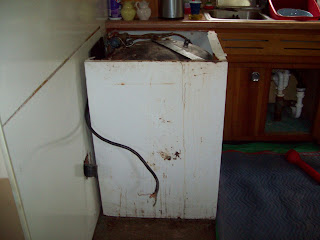 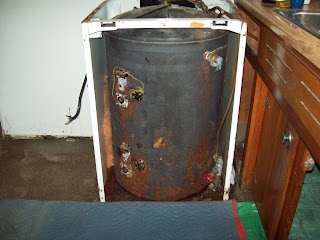 When we removed the heater, we were surprised to find the sewer clean-out underneath it. The bottom of the heater had been cut out to make room for the clean-out. 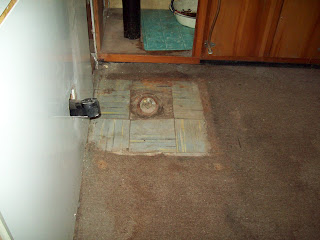 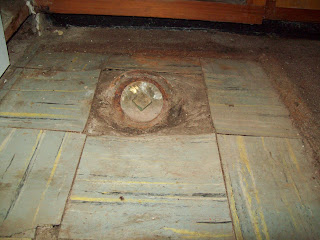 This tile was under the carpet and brought back many memories. Tom worked several days on the pipes and the plumbing to make it easier to empty each fall and fill each spring. It took several trips to the hardware store but this afternoon the project was finished. We have hot water. I just finished doing dishes and washing a load of whites-which I didn't want to do with cold water. I'm very thankful that it is working again.
Now we are hoping to do some major remodeling or renovation or new building next summer. We are considering many options. Here's the new heater. It doesn't have the finished look of the old heater but we are thinking that it is just for this summer. Next summer we'll be starting our project. 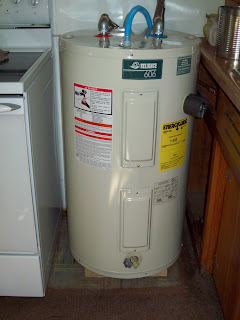